The Culver Military Academy, located in Culver, Indiana, has produced some of the nation’s top military leaders. In addition some of our nation’s leading businessmen and women are Culver graduates. This historic institution prepares students for college, military careers and beyond. Culver Military Academy, also known as the Culver Academies, is actually home to three different prestigious entities.

While steeped in a heritage that dates back over one hundred years, CMA is a progressive college-preparatory school that uses the military model to educate and train its cadets in practical leadership. While maintaining its focus on academic, athletic, and extracurricular excellence, CMA integrates hands-on leadership with every campus endeavor. Like its CGA counterpart, CMA empowers its students with unparalleled responsibility and authority, to help execute the mission of the school and develop leaders of character. While the similarities with the Nation’s Service Academies are striking, our graduates largely pursue civilian careers, and routinely rise to positions of great importance.

The Culver Military Academy (CMA) is the oldest of the three entities. In fact, it is one of the oldest private military schools in America. It was founded in 1894. The military atmosphere helps to emphasize leadership and accountability in students. Students are held to an incredibly high moral standard.

The summer programs at Culver Academies are exciting, educational and rigorous. There are various programs to choose from. Highlights of the equestrian program include old-fashioned Calvary camping, cookouts, campfires and mounted games. Other students may be interested in aviation or sailing classes.

Students can attend the Culver Academies in a traditional boarding-school fashion, or treat it as a day-school institution. Their mascot, the eagle, represents the school’s strong patriotic background.

The Culver Academies are known for more than just top-tier academic programs. Their equestrian program, the Black Horse Troop, is one of the most prestigious riding academies in the country. They are also home to one of the largest indoor riding halls, the Vaughn Equestrian Center. Culver equestrians are often invited to ride in the Presidential inaugural parade. In addition, Culver produces some of the best fencers in the nation. Besides fencing and horseback riding, Culver is well known for competitive sailing.

Getting Into The Culver Academies

The Culver Academies are accredited through the Independent Schools Association of the Central States. Students who are interested in attending one of the academies should apply well in advance. There is typically a large waiting pool for each school year. Students can fill out an online application. In addition to the application, they must also schedule a campus visit and personal interview. Finally Secondary Schools Admission Test (SSAT) scores must be turned in prior to acceptance. International students can take a similar admissions test during the application process.

This prominent institution has been preparing students for successful educational careers for over 100 years. Students are provided with unparalleled academic support and a wide variety of extracurricular activities. The Culver Academies is a perfect choice for any student who is considering a service academy after graduation. 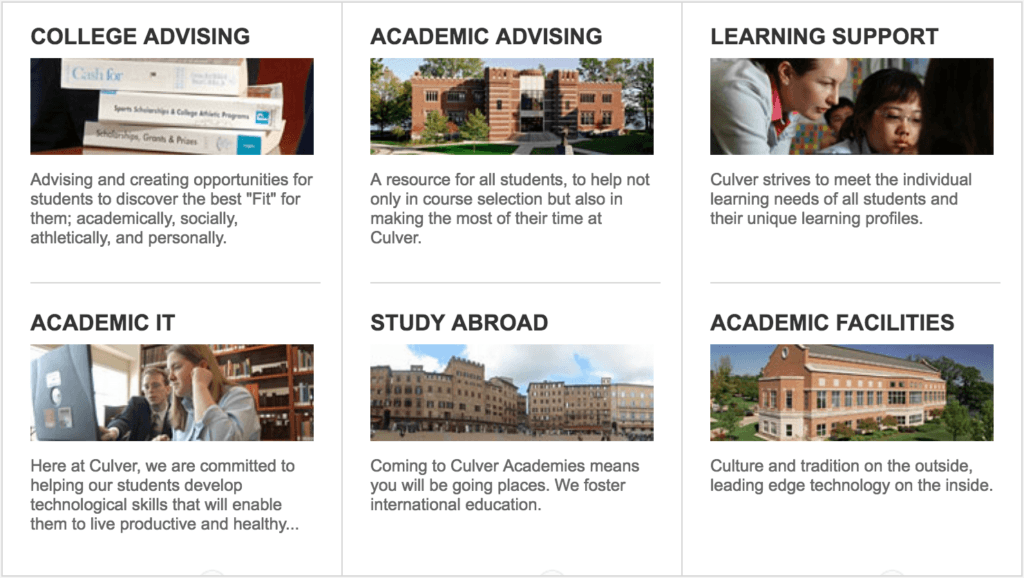 Culver Military Academy has produced some of the nation’s top military leaders, including our nation’s leading businessmen and women